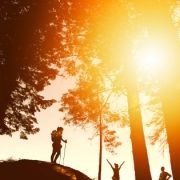 The Appalachian Trail has long been a historical hiking spot and travel destination for adventure-seekers everywhere. While most people know it today as a popular backpacking trail and almost even a rite of passage for hikers, the Trail has a surprisingly long history, as do the cabins, hotels, and other forms of local lodging nearby. Learn more about the history behind this popular outdoor adventure destination and the accommodations that have grown around it.

Originally, the Appalachian Trail was constructed as a way to connect various farms and camps along the Appalachian Mountains. The concept was originally written about by Benton MacKaye, an American forester and conservationist, who envisioned a great trail stretching through the region. Hiking wasn’t even part of the original plan and only was involved as an afterthought. The first stretch of the trail was opened in 1923 and continued to grow over the course of several decades.

As the trail continued to grow in length, it became a popular spot for hikers and travelers. While the original goal was connection and conservation, its trail length and difficulty made it a popular challenge among hikers. The entire trail today extends for roughly 2,200 miles and runs through most of the states along the U.S. east coast. While most hikers do not attempt the full length of the trail, many will need accommodations during their trip, however long it lasts.

The trail was originally designed to connect various farms and camps, but also included many other forms of local lodging. Laughing Heart Lodge, for example, was built in 1892 and, for over 50 years, was a Jesuit Retreat Center. As Laughing Heart Lodge sits along the Appalachian Trail, it and other accommodations often host hikers attempting to hike the length of the trail, either alone or in groups.

The Appalachian Trail is one of America’s most well-known and longest hiking trails, and it has a wonderfully detailed history of connection and conservation. Those attempting the hike will benefit from local lodging options, even if you’re not attempting the full length of the trail. For more information on the trail or on local lodging and accommodations, contact Laughing Heart Lodge today.